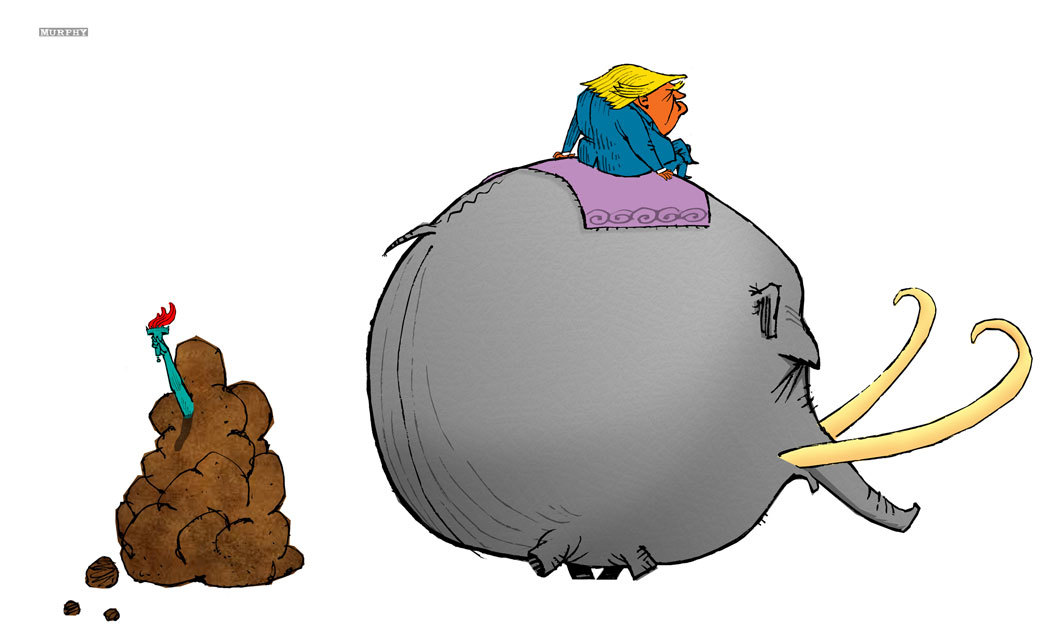 This is starting to look a lot like terrorism.

The current administration ran on fear – fear of “other.” Other religions, other skin colors, other nationalities, other genders, other sexualities. They’re not “us,” whatever “us” is, so they are bad. The Mexicans are rapists. The Mexicans and South Americans take your jobs and bring drugs. The Muslims are terrorists and don’t allow their women to speak. Christians are good, but people of any other faith have no morality and tear down our society. The transgender and gay, etc. are weird pedophiles. The refugees bring crime and take jobs and are terrorists. Black people cause crime because they are all poor and lazy. Breastfeeding mothers are disgusting. Women only have value (as a man’s property) if they are young, beautiful, and have large breasts. Also, only women are “neurotic” (gotta love this gem considering, you know, it’s one of 45’s). Poor people are a drain on society.

They’re selling this line of bullshit and actually getting people of their “other” group to vote against their own interests and support all this hate and division as if somehow this leadership, if you can call it that, will magically make these “others” into part of “us.” I’m magically going to stop being who I am and change into a wealthy, straight, white, Christian man? No. Then why are all these schmucks joining in so enthusiastically? They like living in fear? It’s like being the first to volunteer for stoning. “Oh! (hand shoots up in the air) Oh! Pick me!” Fucking freaks.

Trump is, of course, intelligent and of exceptional genes. *GAG* Not neurotic at all. Not willfully ignorant. Not a liar and a con. Not a sexual predator. Not a narcissist. Nothing infantile about him. (also not one of Putin’s spies) No, no, he’s the messiah, come to fix all our problems caused by the “other.” What a crock of shit. And a bunch of dumb suckers bought that crock and are spreading it all around, smearing it on our White House, our government, our reputation, our kids’ futures. 36% of these dumb fucks are still eager subscribers, patiently waiting for their handful out of that crock. *BARF*

And the administration is being as horrible as they can be to all of our allies while they bait other countries. They’re picking fights our people will have to finish, our children could die in.

Today we find that republicans plan to keep citizens in fear of losing their health care coverage. They need to keep businesses wondering what is going to happen in the health care industry so stocks stay screwed up. Meanwhile, the president threatens our own representatives in Congress if they don’t give him what he wants.

Some of us like not being in fear of mortal danger all the time. Fear of losing insurance, fear of losing our jobs or homes, fear of deportation, fear of traveling even in our own country, fear of being called out and punished by fellow citizens for being not of the “right” color, tax bracket, gender, sexuality, and religion.

It’s time for the government to fix what is broken with the ACA and quit threatening us with losing our insurance. Leave protections in place for clean air and water. Denounce hate and terrorism here in our own country. Drop the terrorism schtick. Too many of the government’s minions have joined in the posse of racists and sexists. Lead, people. It’s what we pay our government representatives for. Right now 45 and the numpties look weak and petty. It’s not a good look for us.

We have more to fear than fear itself in this country right now. We can’t live long in fear. We can’t thrive until we find security again. It’s time to free ourselves, get the terrorist tyrant and his numpties out.

(Bonus – just for kicks I typed into Google “Trump threatens” and hit enter. Read. You should try it.)

Link: “Affordable Care Act Repeal Is Back on the Agenda, Republicans Say” – by Robert Pear and Jeremy W. Peters of The New York Times